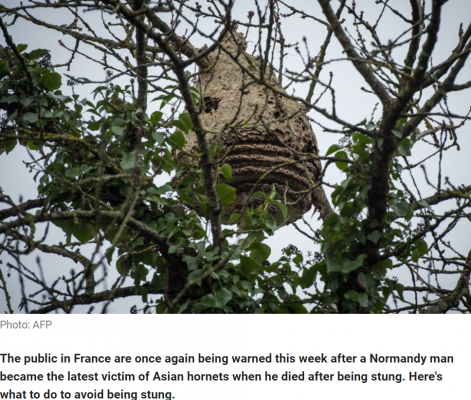 Ever since the killer or ‘murder hornets’ were first spotted in the US recently, people are taking extreme precautions to prevent a hornet attack. These hornets are very aggressive, once provoked so a few moments to educate yourself on what you can do to avoid a hornet attack.

Stay away from their nests. Giant Asian hornets, Vespa Mocsaryana and Vespa Mandarinia, do not generally sting without provocation, but anyone touching their nests is vulnerable to a group attack. Keep at least 6 feet (1.8 meters) away.

Don’t run. If you do accidentally disturb a hornet or its nest, keep in mind they can fly faster than you can run. Instead, crouch low to the ground, stop moving and try to cover your head. Hornets are intrigued by moving targets and consider running a provocation, explained Li Xin, a professor of insect research at Northwest Agricultural and Forestry University.

Skip the aftershave. They are drawn to perfume and cologne.

Don’t drink in excess: They’re also agitated by the smell of alcohol.

Do not deliberately disturb a hornet nest. While this may seem like common sense, many people set off an attack by being overly curious. If you think you may have discovered a hornet nest, call for professional help.

Avoid panicking if a single hornet happens to land on you. Typically, the hornet will simply fly away after a few seconds. Again, this is for a single hornet.

Use caution when deciding to eat outdoors. Everyone loves a picnic, or just eating lunch outside to take in a beautiful day. However, if you happen to live in an area where recent hornet sightings have been reported, be mindful of the risks.

Where there are bees, hornets may soon follow. Hornets love bees! Bees are a great source of protein, but also are a flying honeypot.

Avoid walking barefoot through vegetation. This is especially true if a grassy field is mixed with clover and blooming ground cover.

Wear clean clothing and bathe daily. Sweat has been known to anger bees and hornets

Inexpensive products to safeguard your family against killer hornets

How to ward off a giant hornet attack – Quartz

How to avoid getting stung – Treehugger